Where's all the smoke coming from?

I'm sure that a lot of people have been asking over the last few days where all the smoke is coming from.

A few days ago, with no sign of any smoke columns to our north, we were getting very fresh smelling smoke on the strong northerly winds.  Today there is a general smoke haze, but it is clearly thicker to the north.

Bear in mind that these are fires that are/were large enough to be registered by the satellite (usually of the order of 1 sq km) and were there when a satellite passed overhead.  The Firewatch web site is an excellent place for checking on large, relatively long-burning fires in your vicinity.  There's a link to it on this site under the Rural Fire Locations tab at the top of the page.

The northerly wind today is blowing a lot of smoke into our area from fires much further north.  There aren't many fires visible anywhere near the Helidon Hills on the Firewatch site.
The screen shot above has the same legend as above, and was captured at about the same time.  It uses a combination background of Google Earth and map features - harder to look at than the plain background in the first shot, but much easier to locate fires in relation to local features.

The orange spots well to the east of Crows Nest National Park are either in the eastern edge of the Deongwar State Forest, or just outside the State Forest.

Remember that sites like Firewatch and Sentinel do not pick up smaller fires, or fires that may have started recently.

In particular, please do not be lulled into a false sense of security because much of the Hills south of Seventeen Mile Road burned in late October.  There is still something like 30,000 ha of bush in the Hills that did not burn in that fire.

REPORT ANY SMOKE IN THE HILLS TO ONE OF THE SMOKESPOTTER COORDINATORS.

At our place in Vinegar Hill it feels like at least a very high Fire Danger day, but the Forest Fire Danger Rating on the RFS site for today has not been updated from what was posted last night, and the rating still shows as High.  I checked on the WeatherZone site for current conditions in Gatton at 11.50am, and that also shows a current High rating. 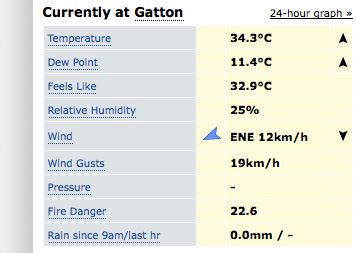 However it has climbed from a 20 rating half an hour ago, and is nearing 25, which is the upper limit of the High rating.  Bear in mind thought that these WeatherZone ratings are indicative and are calculated using a formula that assumes a worst case drought factor.

Relevant Fire Danger and Weather Links for the Lockyer Valley Region are now under the tab above.